Edna House is parting her daughter’s hair into small neat triangle ponytails while the three-year old watches cartoons inside their apartment. The pair was abruptly moved into this unit a week ago.

House says she complained for more than a year to the management at the Stonybrook Apartments that her last apartment had a mold problem.

“They knew what was going on and yet they still did nothing,” she says. “I complain and complain and they saw me as like a nuisance.”

Global Ministries Foundation (GMF), the owner of Stonybrook Apartments, is in the process of trying to sell it to Millennia Housing, which manages the day-to-day operations.

Both entities have a history of owning or managing properties around the country with reported slum-like conditions.

The families who live at Stonybrook recently formed a tenant union and launched a rent strike to protest what they describe as years of neglect. The union identified the environmental hazards at the complex as one of their biggest concerns because their children play, live and sleep there.

House is now vice-president of the union. She says she complained when the walls in her last apartment changed from white to brown to black. Administrators sent a handyman with a sponge.

“They tried to wipe it with some bleach,” she says. “The mold came right back over it.”

House and her daughter lived in that first-floor apartment for nearly three years and during that time she says her daughter constantly got sick.

“She kept on having problems with her eyes and just all the mucous that was always in her throat,” says House.

As members of the Stonybrook tenant union started knocking on doors and talking to families, House says they found many other children who had breathing complications.

“A lot of kids here do respiratory treatments and I didn’t realize that until I started going door [to] door,” she says.

The union got an attorney to represent them and in July they had an air quality test done at House’s old apartment and a few others at Stonybrook.

The results from her old apartment showed a high level of  black mold.  According to the Center for Disease Control, exposure to mold can cause respiratory problems, itchy eyes and other health issues.

After the air test, the management company gave House and her daughter a day to move into another apartment in the same complex.

Malik Leigh, the attorney representing the union, recommended every family at the complex get their children tested for exposure to mold, asbestos and lead. 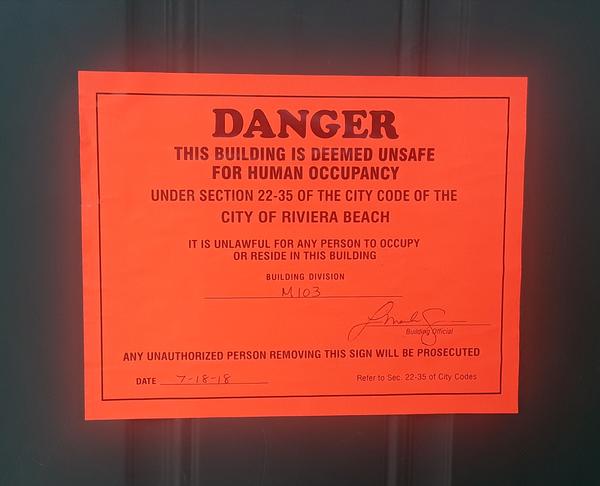 On July 11, teams from the City of Riviera Beach Code enforcement and building office inspected the Stonybrook apartments. Code enforcement officers found 36 aparments were uninhabitable and placed orange stickers on the doors.  The stickers read: “Danger this building is deemed unsafe for human occupancy.”

In a city memo dated July 20, building official Ladi March-Goldwire wrote: “Asbestos reports provided to us by the property management team indicated the presence of ACM (asbestos containing materials) in the majority of units tested.”

When left undisturbed, asbestos generally is not a health risk. But March-Goldwire wrote, “It has been the observation of this writer in several units that flooring had been disassembled and that wall repairs had been done to the contrary,” or in a way that disturbed the asbestos.

She also noted there was a visible presence “of what appeared to be mold throughout the majority of units.”

“This place is like basically a cemetery for women,” says Crystal Lewis, president of the tenant union who says Stonybrook is made up of mostly single moms with kids. “You know everybody comes out here, gets sick.”

As she walked through the apartment complex she pointed out the doors with orange stickers.

“They were actually supposed to move the people out the units right after,” she says.

One month after the City of Riviera Beach condemned her apartment, Nakita Felder-Davis was still living there with her four-year-old son.

According to the U.S. Department of Housing and Urban Development (HUD), Millennia is responsible for making sure tenants are removed from condemned apartments and placed into another apartment or a hotel.

A spokeswoman for HUD said she was not aware people were still living in the condemned apartments.

“It isn’t acceptable for residents to be in units that have been condemned,” she wrote.

Riviera Beach Mayor Thomas Masters says Millennia assured the city that the people in the condemned apartments would be moved immediately, but it’s unclear how many have been relocated.

Felder-Davis says her son has asthma and she’s made several trips to the doctor because of breathing problems and swollen tonsils. She says she was concerned something in her apartment could be making him sick.

“I complained last year. My son was admitted in the hospital for five days,” she says.

Like some of the other children who live at Stonybrook, he uses a nebulizer twice a day.

Felder-Davis recently started sending her 4-year-old to stay with her mom in Delray Beach out of concern for his health. She plans on having him tested for exposure to mold and asbestos.

“This ain’t what I signed up for,” she says. “It should be some kind of way that they can evacuate all of us.”

No job too big or too small!

“My husband and I were extremely pleased with the quality and professionalism of your company and employees. The work was completed in the time frame that you quoted and best of all with the price that was quoted. I mostly liked that your men left my basement in better shape than when we started the project. Overall my husband and I who rate your company A Plus”